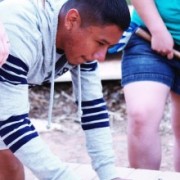 In October StudentReach recognized the best of our students, as Guests of Honor at a fundraising event we held for the Sacramento community. Our students told of how StudentReach has been apart of their life changing experience. One of those students was King.

King first started coming to Baja with StudentReach in 2012. He was one of our first life coaching students at a school that we’ve worked with for 4 years. King, decided to come on the advertised Baja trip to build a home for an impoverished family. His ability to speak Spanish and confidence to translate at such a young age was invaluable in Baja. After returning home he continued in our life coaching program and soon after graduated from high school. His work did not end there.

King has been apart of 8 house builds with StudentReach, and is now leading students at his former high school to success. He truly is, a shining example of why we push our students to give back.

Baja isn’t always about the people we are building homes for, many times it is for ourselves. Maybe you have been changed by a trip to Baja, like many of the students we work with have.Giving changes us to do more and be better in life. 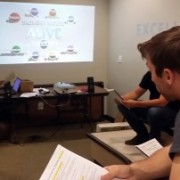 “When we first saw these effects, we thought, wow, can this be right?” said Sara Heller, a University of Chicago researcher. She was speaking on the Freakonomics Podcast on September 9th.

In 2013, the state and city governments asked the University of Chicago to conduct randomized, double-bind research into what, if any, of their crime reduction and success promotion programs in the Chicago public school system were actually working. Some of those programs included mentoring, job training and even direct payments for scholastic achievement.

No measurable results from any approach except one: group coaching.
The kind of coaching that sought to do something previously thought to be almost impossible – changing behavioral patterns through cognitive process assessment. In other words, setting up scenarios and getting students to discuss and evaluate their automatic response and other possible responses that might result in better outcomes. The groups almost bear a resemblance to cognitive behavioral therapy – an approach to therapy that focusses on behavioral change through self-examination and discussion. CBT has been shown to be successful with treating depression, addiction and other difficult problems, but that a version of this approach by non-therapists could be that effective was a result that was unexpected.

It wasn’t unexpected to our team of coaches. For over 3 years, StudentReach has been using that approach with groups as varied as leadership students, continuation school students, gang-affiliated young men, Afghan and Somali refugees, and homeless students. Combining weekly group discussions and coaching with other relational activities has been an amazing way to reach some of the most difficult and seemingly unreachable students.

One of the most surprising results of the study was that with programs ranging in cost as high as $15,000 per student per year, the group coaching/CBT model was the cheapest by far – about $1100 per student.

StudentReach has presented school assemblies to over 1,000,000 students and taken over 5,000 on summer volunteering trips, but when we decided to start coaching students in small settings of 5-10, we were surprised at how effective it really was and how rewarding seeing real change in the lives of these students really was.

To listen to the Freakonomics podcast, go to freakonomics.com

To learn more about ALIVE coaching on our Student Coaching page. 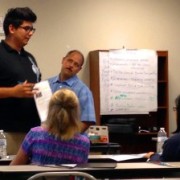 “Why would students sit in a class after sitting all day in class at school?” – Matt James

Matt attended our A.L.I.V.E. Life Coaching seminar this weekend to get that exact question answered. During Session 1 of the A.L.I.V.E. Seminar we were able to bridge the gap between students and adults as we had the adults sit in our week 1 coaching session.

We didn’t change a thing – we spoke to them just the same as our students to help them see exactly what would be experienced and see the level of communication we try to achieve. “We want to be as genuine as possible” said Coach Mason Gizard to his class of adults.

During Session 2, as the attendees moved from participant to coach, it became clear that the curriculum is intended to be much

more of a conversation between the coach and their students then a lecture. “I would rather have a student interrupt me then no one be talking” said Coach Raquel Shipp during training.

The Life Coaching material is intended to keep the facts interesting and the stories applicable. One of the adult leaders blurted out “Oh this is fascinating!” as she was reading through her coaching section in front of the group.

Stories were shared, there was lots of laughter, and people became vulnerable which together helped build relationships quickly.

This is why students are willing to come sit in a group, in a circle of chairs even after hours in the classroom. We don’t sit in rows staring at the front; we circle up, engage and build relationships in order to speak truth into the lives of students. Matt and many other adults left the A.L.I.V.E. Seminar with the tools they need to succeed as coaches; just as students leave Life Coaching with the tools they need to succeed in their life and future.

For more information on how you can implement this program at a school in your community contact us today!